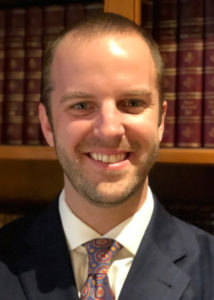 A North Carolina native, Robert was born and raised in Raleigh. After graduating from the University of North Carolina at Chapel Hill with a BA in psychology, he spent a year in Beijing, China, where he studied Mandarin and taught English to young school children.  Robert received his JD from the University of Alabama School of Law in 2013.  While in law school, he co-founded the Law and Economics Society, served as a senior editor for the Law and Psychology Review, and represented indigent clients in the Tuscaloosa Public Defender’s Office.

When he’s not practicing law, Robert enjoys soccer, playing guitar, and following his favorite sports teams (go Heels, go Panthers, and Roll Tide!).  Robert is a former member of MENSA and has a love for travel and languages.